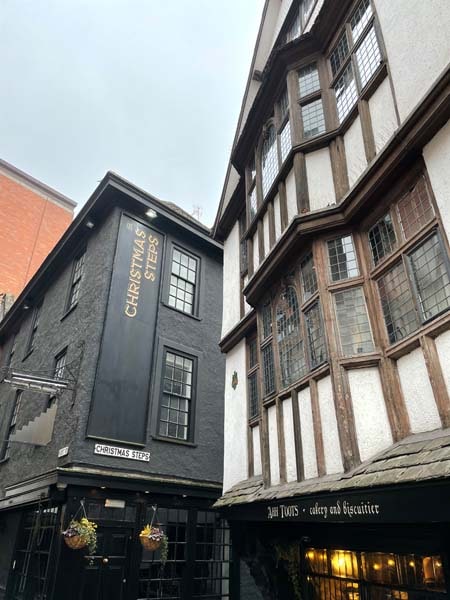 At the top of Queen’s Road stands the Victoria Rooms designed as assembly rooms by Charles Dyer. The foundation stone was laid on 24 May 1838, Queen Victoria’s 19th birthday, in whose honour the building was named. The building was constructed between 1838 and 1842 in the Greek revival style. There is an eight-column Corinthian portico at the entrance, with a classical relief sculpture designed by Musgrave Watson above it. The construction is of dressed stonework, with a slate roof. A bronze statue of Edward VII was erected in 1912 at the front of the Victoria Rooms, together with a curved pool and several fountains with sculptures in the Art Nouveau style.

The building contains a 665-seat auditorium, a lecture theatre, recital rooms, rehearsal rooms and a recording studio. Its doors first opened to the public in May 1842, and for many years served as the most important and lively cultural centre in the West of England, hosting Charles Dickens who gave readings here from 1866-1869. Another visitor was Oscar Wilde who lectured on Aesthetics. And a Swedish opera singer, Johanna Maria ‘Jenny’ Lind, often called the ‘Swedish Nightingale’.

To the left is the ‘Studio’ where the Bristol inventor of cinematography, William Friese-Greene, opened his studio in 1880. Friese Green had opened a studio in Bath the previous year and he had another in Plymouth.

To the front is a statue of Edward VII, erected in 1912. In the central reservation, there is a war memorial. Sculpted in 1905 by Onslow Whiting in granite and bronze. A rock-faced plinth with a figure of a soldier holding a rifle. Unveiled by Earl Roberts, in 1905, a memorial to the men of the Gloucester Regiment who lost their lives during the South African ‘Boer War’.

To your right is Park Place, opened in 1830, a green square overlooked by a mix of tastefully restored townhouses and sympathetically designed modern properties. One of 30 communal ‘green’ spaces in Clifton, the small triangle of the lawn is dominated by a single Beech that was planted around 1890.

Walking back to Queen’s Road and crossing to the left-hand side, you are on the Royal Promenade. The Royal Promenade, now numbers 48-68 Queens Road, was designed by Foster and Wood in the Italianate style and erected 1859-68. This rank of shops with its impressive colonnades eventually became a large department store. The Promenade was designed to resemble a palace rather than a row of fifteen houses. You will see that the centre pediment contains the royal coat of arms.

Further along can be found in the City Museum and Art Gallery, a treasure trove of art and history located in the heart of the city’s tourist trail. The Museum and Art Gallery dates back to 1823, with exhibits moving into their current building in Queen’s Road in 1905. Outside is a plaque stating that on ‘July 26th 1643 Colonel Henry Washington attacked the Parliamentary defences between Royal Fort and Brandon Hill’.

Next to the museum is the Will’s Memorial Building with its 215-foot tower. The Wills Memorial Building (also known as the Wills Memorial Tower or simply the Wills Tower) is a Neo-Gothic building designed by Sir George Oatley and built as a memorial to Henry Overton Wills III by his sons George and Henry Wills. Construction began in 1915 although the doors were not opened until 1925. It is considered one of the last great Gothic buildings to be built in England. The octagonal belfry in the tower is home to ‘Great George’, a nine and a half-ton bell, which is tolled on the death of a monarch or chancellor.

Crossing to Berkeley Square, which was laid out around 1790 in Georgian style with a central grass area behind railings, by Thomas and William Paty. John Addington Symonds, the Victorian critic, was born at number 7, and John Loudon McAdam lived at number 23. McAdam was the General Surveyor of roads for Bristol and revolutionised the world’s view of road building. His work also added a new word to the dictionary, macadamized. Number 24 was used as the main exterior in the BBC television drama The House of Eliott. In the gardens, you will see the ‘Civic High Cross’. This is a replica of the Bristol High Cross which was erected in the city in 1373 honouring a number of British monarchs and moved to College Green in 1733. The statue was given in 1768 to Stourhead gardens and can be seen there today. The current statue is a replica that was originally sited on College Green was made by John Norton in 1851 and removed in the late 1940s.

Walk back to Park Street with its views over the city. The construction of Park Street commenced in 1761 and it was Bristol’s earliest example of uniformly stepped hillside terracing. At the bottom of the hill and on your left is Unity Street, the site of the St Mark’s Hospital, known informally as St Mark’s Hospital, now apartments, founded in 1220 by Maurice de Gaunt.

The church for the use of the inmates of the hospital was built around 1230 and is the only part of the buildings surviving today. Maurice de Gaunt also founded Blackfriars in about 1227-9 (the cloisters are now known as Quakers Friars).

In 1717 Orchard Street was built in the orchard of the hospital. Many original features have been retained, including door furniture and keystones.

Walk on through Denmark Street to Frogmore Street and the Hatchet Inn. The Inn, first licensed in 1606, stands isolated now, but once formed part of a row of seventeenth-century timber-framed houses dating back to the same period. The Hatchet Inn, reputed to have been patronised by Blackbeard, is Bristol’s oldest pub. The Inn has the original 300-year-old door, which is said to be layered with skin taken from executed prisoners. This was a renowned venue for gambling and blood sports, such as cockfighting.

Returning to College Green via Unity Street and on the left is St. Mark’s Chapel, also known as The Lord Mayor’s Chapel. The chapel’s west front was remodelled in 1830 and 1889. The south aisle window is visible on the right side, the tower to the rear, behind which is the Poyntz Chapel. At the side of the Chapel is a small lane and it is here that you can view the Tower, built-in 1487.

Behind you Bristol Cathedral, across a large grass lawn (College Green), formerly a graveyard used by both churches.