Up to 1892, way before Bristol’s first tramlines were laid in the city centre, ships sailed into the city on the River Frome and until 1827, a drawbridge was in service to allow access to the other side of the river. During this time Bristol was enjoying the status of an international port. It is said that, on busy days, it would be possible to cross the harbour using the decks of the moored ships.

The 18th-century houses still remain on St. Augustine’s Parade and are now predominantly commercial outlets. The Hippodrome, designed by the renowned Theatre Architect, Frank Matcham, and opened for musicals and operas in December 1912.

In the centre is a statue of Edmund Burke, politician, philosopher and polemicist, the MP for Bristol 1774-1780. The statue was erected in 1894. Further along, is where the controversial statue of Edward Colston once stood. Edward Colston made his fortune through slave trading in the 1700s and, although he bequeathed thousands to charitable causes, there are divided opinions as to whether such a person who had strong links to the slave trade should be celebrated. It is but one of many tributes to be found throughout the city to Edward Colston. 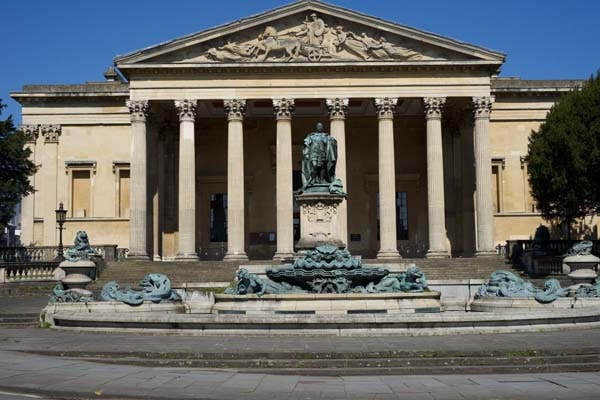 The Cenotaph, built-in 1932, designed by a local female architect Eveline Blacker, with her business partner Harry Heathman commemorates the death of soldiers during the first world war.

On your left is the church of St. Mary’s on the Quay, built-in 1839. A memorial to parishioners who died in the First World War can be seen on the wall. Leaving St. Mary’s and looking along Quay Street where you will see St John’s Church and the last of seventeen gates to the old city. You will also find Host Street, formerly Horse Street, and the foot of Christmas Steps, as well as the entrance to the old 14th-century convent, St. Bartholomew’s Hospital.

The hospital was converted to a Free Grammar school, after the dissolution of the monasteries, in 1532. Above is the 17th-century house where the school remained until 1769 when it was controversially moved to Unity Street in property owned by Queen Elizabeth’s Hospital (QEH), named after Elizabeth I. It thrived there until 1847.

Christmas Street, on the boundary of the Bartholomew estate Formerly known as Cutler’s Street, Knifesmith Street and Queen Street respectively, until 1774, when it became known as Christmas Steps. Originally this was a stone path until, in 1669, Jonathan Blackwell, a Sheriff, paid for the erection of the steps. At the top of the steps in a niche is a tribute to Blackwell.

On your left are the Almshouses built by John Foster, a wealthy salt-merchant, in 1484. They have been rebuilt three times and the one you see today was finished in 1863. The Chapel of The Three Kings of Cologne was built in 1504 for residents of the Almshouses.

Walking across Colston Street and further up the steps to the junction of Maudlin Street and St. Michael’s Hill, where the old King David Hotel sits on the corner. It was on this spot, in 1875, that the first horse-drawn tram appeared on the streets of Bristol. Carrying passengers from King David’s Hotel in Perry road to St John’s Church in Redland. Electric trams were introduced in 1895, the first city to do so in the United Kingdom. At the system’s peak, there were 17 routes and 237 tramcars in use. The Bristol Tramways Company formed by Sir George White, operated until 1941 when a Luftwaffe bomb destroyed the main power supply cables.

St. Michael’s Hill was built in the 17th-century by merchants wishing to live up and away from the pollution of the city. The majority of the property on the hill and surrounding streets are owned by the University of Bristol and has been sympathetically restored. It was here during the eighteenth century, when houses were converted to schools, such as Charles Kingsley and Richard Southey were educated here in Bristol.

On your right is the Colston Almshouses which were built, in 1695 with funds donated by Edward Colston, a West Indies merchant and son of Bristol.

Tankard’s Close, formerly Tinkers’ Close, is where the 17th-century plague victims were housed, away from the polluted city centre. It was also the location of The Rising Sun, an inn, run by widow Harris in 1752. Not much more is known about his establishment only that it no longer exists.

Rupert’s Gate was the route to the public gallows farther up the hill. The name comes from when, in 1643, Prince Rupert left The Fort to the city.

Walking through the gate to the Royal Fort, formerly William Fort and renamed after Rupert took the hill from the Parliamentary forces in a battle the same year.

Royal Fort House, built-in 1767, for Thomas Tyndall by Thomas Paty, with internal décor by Thomas Stocking and gardens originally laid out by Humphrey Repton. It was built on the site of the bastions which were fought over during the English Civil War and demolished in 1655.

On the opposite side is the Physics Building. A university department since 1929. Built by Sir George Oatley in a Tudor Gothic Revival-style with an arrangement of windows with Baroque style details.

Leave Royal Fort by University Walk, turning left into Woodland Road and on to Park Row.

On the corner of Lodge Street stands The Red Lodge, one of a pair which were originally built at the top of the gardens of ‘ye Great House of St. Augustine’s Back’ and named the Great House.

The Great House, built-in 1568, was the product of Sir John Young/Yonge the descendant of a merchant family and courtier to Henry VIII and Elizabeth I[, using the site of the Carmelite Priory which he bought after the dissolution of the monasteries. The Great House was destroyed during the nineteenth century and is now the site of Colston Hall.

The Red Lodge would have originally been used as an additional guest house and entertainment pavilion so that the Young family could promenade their guests through their eight ornamental gardens and orchards to wine and dine them. It was later used by Mary Carpenter, as a school for girls, from 1854 to 1919.

Walking down Lodge Street will pass to the right Colston Hall and return to St. Augustine’s Parade at the foot of Colston Street.