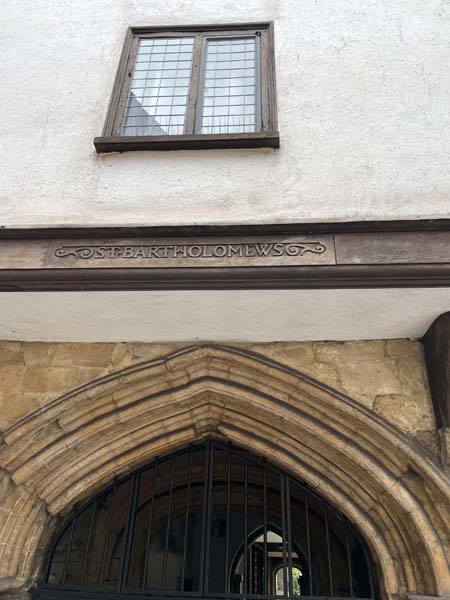 In 1240 the River Frome was diverted through Canon’s Marsh to join the Avon, close to the present Bathurst Basin, in order to provide a harbour close to the town centre. These works were carried out, under the command of Henry III, by men from the Redcliff and Temple parishes. At the time, these parishes were separated from Bristol by the Avon. The effect of incorporating these two parishes into the town was to double the size of Bristol.

Victoria Street started life in the 19th-century and you will see evidence of this in the converted warehousing and rows of Bristol ‘Byzantine‘ shops. These are on the left opposite the first fifteen storey office block which was built in 1964. Further along to the right and just before you turn into St. Thomas Street, there are four fine examples of 17th-century houses, now shops and a café bar.

St.Thomas Street and the Church of St. Thomas the Martyr were built in the thirteenth century and redesigned in the eighteenth. The church is home to an altar-piece from 1716. This was a typical adornment for many parish churches; the most famous of these is Hogarth’s Tryptic, which is hosted at St. Nicholas Church on the city side of the Bristol Bridge.

St. Thomas Lane is the site of the Seven Stars Inn. It was here, in 1787, that William Wilberforce gathered information through his friend Thomas Clarkson, who had befriended the landlord. The Landlord gave information about slave-traders and it was this information that would help Wilberforce in his struggle to bring about the Abolition of Slavery. Britain abolished slavery throughout its empire by the Slavery Abolition Act 1833 (with the notable exception of India), the French colonies re-abolished it in 1848 and the U.S. abolished slavery in 1865 with the 13th Amendment to the U.S. Constitution.

The Woolhall, designed by Richard Shackleton Pope in 1828, was commissioned to compensate St. Thomas parish for the removal of its long-standing cattle market to a then-new site at Templemeads. It was also used as a billet for troops on secondment to quell the 1831 Bristol Riots. The hall saw little activity until 1923 when it was taken over as a warehouse. The building was converted in 1982 and is now in use as offices. Another example of nineteenth-century architecture is number 14, built-in 1885. Turn left toward Victoria Street and cross to the Temple Church, where you will see its leaning tower rising above the buildings in front of you.

These include the King’s Head and the Shakespeare, circa 1660 and 1636 respectively. Temple Church was founded shortly before 1147 by Robert, Earl of Gloucester, and the natural-born son of Henry I, who made a grant of land to a religious order, the Knights Templar. The original building was replaced during the 14t and 15th-centuries by the present one when the church was given to the Knights of St. John and a parish for the citizens was instituted. The leaning tower was completed in 1460 and, having originally been built on wool sacks, has been out true since that time. It was 1.64 metres out on the vertical on its West face.

The Church was heavily restored during the 19th and 20th-centuries and was gutted by incendiary bombs in 1942 during the Second World War. Beside the church are Temple Gardens, a fine site for a snack and a soft drink – weather permitting.

Walking through Church Lane and back to Victoria Street, turning left and crossing to Mitchell Lane. Follow the lane along past Mitchell Court on the right and to the corner of St. Thomas Street and Three Queen’s Lane on your left, until you arrive in Redcliff Street. Turn right and head towards St. Mary Redcliff Church. The church, which is one of the best examples of medieval architecture in the country, is sited on the red cliffs above the floating harbour. It was originally at the very centre of shipping and industry, which is the key to its history.

The merchants of the Port of Bristol began and ended their voyages at the shrine of Our Lady of Redcliffe and it is to them, especially William Canynges and his grandson in the 14th and 15th centuries, that we owe thanks for the body of the Church as it is today.

There are significant links here with the United States. Admiral Sir William Penn, whose son William founded Pennsylvania, is buried in the South transept, while St. John’s Chapel was restored by the friends of St. Mary Redcliffe in the United States. John Cabot, who sailed from Bristol to discover Newfoundland in 1497, is also commemorated in the Church.

It was here that Thomas Chatterton used old parchments on which to write his Rowley Poems, not far from his birthplace on Redcliff Way and close to where his father worked as a teacher.

Outside and to the rear are the gardens, as well as Colston’s Parade and Fry’s House of Mercy, established in 1784 as, an Almshouse for young women.

Samuel Plimsoll, famous for originating the ‘Plimsoll Line’ – the benchmark for enforcing the ‘Load-line’ in the Merchant Shipping Act of 1876, was born at Colston’s Parade in February 1824.

Back on Redcliff Hill and set in the church wall is the Conduit. The water source is in the Knowle area of Bristol. There is an annual tradition, named St Mary Redcliffe Pipe Walk, that sees participants follow the route of the conduit, a distance of approximately 2 miles. Newcomers on the walk are traditionally ‘bumped’ on marker stones that record the route of the pipe. The tradition of the walk is said to date back to 1190 when Robert de Berkeley donated the water to the people of the parish. There is an effigy of him in the north transept of the church, from 1220. The walk has been referred to as ‘the oldest observed custom of its kind’.

At the bottom of Redcliff Hill walk over the road at the crossing. On the far side, you will see a garden set into the red cliff. In 1665 this garden was granted to the Society of Friends by Charles II as a burial ground and was still in use as such until 1921. At the rear of the garden is St. John’s Hermitage, a small cave, which was occupied by a succession of hermits between 1364 and 1669. The area is riddled with caves, probably as a result or quarrying during the 18th-century. These caves may be viewed on the Bristol ‘Open Doors Day’, held in mid-September each year.

Walking up Redcliff Hill past Redcliff Parade and Phoenix House and right into Guinea Street. GUINEA STREET, named after the Gold Guinea Coast, was an area of piratical activity in the 1700s and comprised of a squalid area of narrow lanes. Numbers 10, 11 and 12 are houses that were built in 1718 for Captain Edmund Saunders, a prosperous merchant of the time. Actually, Captain Edmund Saunders lived in Guinea Street, in Number 12. Saunders was the busiest slave Captains and was personally responsible for transporting 10,000 slaves to Jamaica and America. He was also a warden in St Mary Redcliffe church. If you look you will see the well-worn key blocks depicting eagles, dolphins, an Irish harp and a parrot.

The Bristol General Hospital was built in 1832 to care for industrial casualties from the docks and nearby industry. The design of the hospital, a warehouse-style of the Italian Renaissance, attracted an award for the architects Gingell and Lysaught. They had constructed the basement to accommodate 8,000 square feet of space.

This was let to merchants in and around the Bathurst Basin, which in turn provided an income for the hospital. The hospital closed and, the Grade II listed building was sold to a developer. The purchaser stated that they are “looking forward to ensuring that the buildings are restored to their former glory and believe that with its stunning waterside location close to the centre of the city, which provides a new dimension to the Harbourside area.” This has now been transformed into a smart apartment complex with busy eateries below.

The Ostrich Inn, built-in 1775, was a favoured watering hole for sailors, shipyard and dockside workers and merchants who worked in the Port of Bristol during the time of the slave trade. One of its walls has been partially removed so that part of the caves under Redcliffe can be seen.

Opposite, and across the inlet, is the modern Trin Mills development, which takes its name from the former site ‘Treen Mills.’ This would have been the site of warehousing and industrial cranes. Some of the original warehousings remain and has been sympathetically converted for residential use. This overlooks Bathhurst Basin.

Bathurst Basin is a small triangular basin adjoining the main harbour. The basin was built on an area of an old mill pond, Treen Mills. The pond was supplied by the River Malago, from Bedminster to the South up to 1809 when it lost its water supply as the New Cut was created. ‘Malago’ means ‘Mill Place’ in Brittonic (British Celtic).

Walking over the footbridge and straight on with the ‘moorings’ to your left and you will arrive at the location of what was originally the Bathurst Tavern, built-in 1800, now Louisiana. When it was built it would have had an enviable view of the surrounding countryside, and this is what must have inspired the first floor balconies, which are in a style reminiscent of New Orleans.

Across from this is what remains of the Old Gaol, part of the Gatehouse still visible on the Cumberland Road. This was the site of the last public hanging of a woman, Sarah Harriet Thomas, who was convicted of murder and hanged here in April 1849. Even the by then veteran hangman, William Calcraft, who was seconded in from London to perform the task, was greatly affected by this job and said later that Sarah Thomas was ‘in my opinion, one of the prettiest and most intellectual girls I have met with.’ Built-in 1820 to replace Newgate, the rioters burnt down the Governor’s quarters in 1831 and liberated the inmates.

Travel along Wapping Road back towards the centre and on your left, you will see the M shed, which is situated along Prince’s Wharf.

M Shed’s ancestor was the much-loved Bristol Industrial Museum which was open from 1974 – 2006.

For 32 years the Industrial Museum was the key attraction on Bristol’s harbourside. Over 150,000 visitors a year came to learn about the industrial and maritime history of the city.

M Shed is an exciting and innovative museum, telling the story of our city and changing perceptions of what it has meant to live here over the centuries.

Here you will also see many historic pieces of industrial equipment, including cranes and the world’s oldest tug.

Salvaged in 1970 in the Falkland Islands, it was returned and restored to its former glory. You will be able to board the vessel at a small cost. Nearby is a replica of The Matthew. The original vessel was used by John Cabot when he discovered Newfoundland in 1497.